The views expressed are those of Anchor Capital Advisors, LLC (“Anchor”) and are subject to change at any time. They are based on our proprietary research and general knowledge of said topic. The below content and applicable data are in support of our views on said topic. Please see additional disclosures at the end of this publication.

Energy has been the best performing sector over the last three years. It is also the only sector that has produced a marked positive absolute return over the last year, up close to 60%. By contrast, the next best performing sector this past year has been utilities, which is up less than 2%. Despite the energy sector’s strong recent performance, many companies within the sector still trade at low valuations and have attractive dividend yields as we speculate investors remain skeptical that the good times will last. This skepticism is understandable given the industry is mostly comprised of oil and gas companies that underperformed over the last decade until recently.[1] The oil and gas markets are notoriously complex and volatile, making them unpredictable. Moreover, as the world aims to shift the energy mix more toward renewables, many investors see the old energy sector as uninvestable, worrying about the terminal values of oil and gas companies. Instead, they appear to only invest in companies involved in renewable energy. At Anchor, we don’t see it as an either/or decision. We believe the current market dynamics are set up in such a way that both new and old energy companies can outperform in the coming years, meaning there is room in our portfolios for both sets of companies. 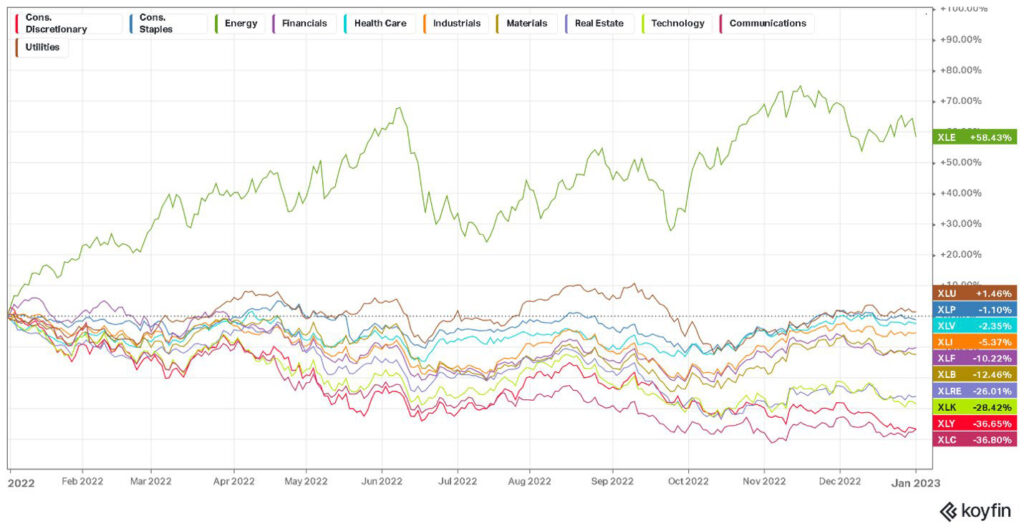 There is something about the term “energy transition” that makes it sound like a simple and smooth process. In reality, energy transitions have always proven long and arduous and this one, in particular, will be far more complex than any energy transition in history. We see several reasons for that. The first is the degree to which the world relies on fossil fuels today, which itself is often not fully understood. Oil, for instance, is not just used for fuel in cars, ships, rails, and planes. It’s also refined and sent to petrochemical plants where it is turned into thousands of essential products we use in our everyday lives such as plastics, textiles, and cosmetics.[2] For example, the iPhone is made from plastics and other oil and gas derivatives. At least 90% of the material used to make a North Face jacket is made from petrochemicals derived from oil and natural gas.[3] Common medicines like Tylenol and even the Pfizer and Moderna vaccines all contain petroleum-derived products.[3] The quality of life enjoyed in the 21st century is directly linked to oil and gas consumption with today’s $86 trillion world economy getting more than 80% of its energy from hydrocarbons.[3] To replace all of that energy in the timeline many are predicting is ambitious. Shifting to electric cars, which are themsevles 20% plastic, is just one small step in the journey.[3] The entire transition will require going far beyond that.

The second reason this energy transition will be more difficult than previous ones is the need to replace existing forms of energy production and consumption with other forms. In past energy transitions, the new energy sources came on as additions to the existing sources, not full replacements. The world did not stop burning wood when coal was discovered and it did not stop burning coal as oil and gas became more prevalent. Further, in each of those cases, it took over a century for the new energy source to become the world’s primary energy source. To have fully replaced the older sources would have taken even longer.

To get a numerical sense of the economic and infrastructural inertia behind the current global energy system, consider this. After over two decades and hundreds of billions in investment into renewable energy, fossil fuels still provide ~83% of the world’s energy, compared to ~86% in 2000. On top of that, even while the share of oil and gas as a percentage of total energy consumption has fallen, the absolute demand for these energy sources has continued to rise.[4] Part of the reason for this is that even as developed countries begin to curtail their usage, demand growth in emerging markets is more than offsetting it. 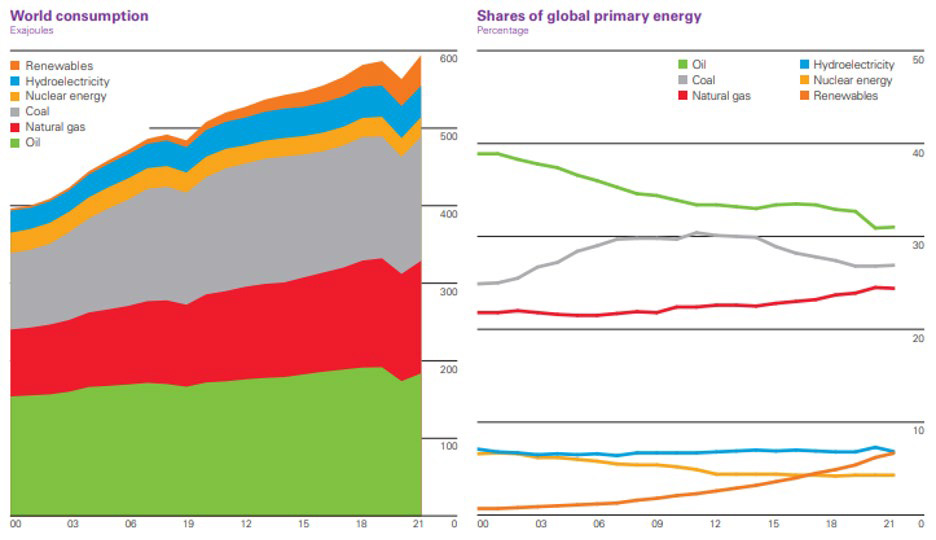 As the legendary investor John Templeton once said, the four most dangerous words in investing are “this time it’s different.” [5] While we would agree with the sentiment, in a few ways, this time actually is different in the old energy space (at least for now). The primary way it’s different is on the supply side where years of underinvestment are finally catching up to the industry and management teams seemingly have no interest in trying to make up for it. Upstream investment in the oil and gas sector in 2021 was still nearly 25% below 2019 levels. [6] The underinvestment in oil and gas has come prematurely, as renewables are not ready to scale up to meet the world’s energy demand. This, along with geopolitics including the Russia/Ukraine war, is a major reason why we are seeing energy crises break out across the world. 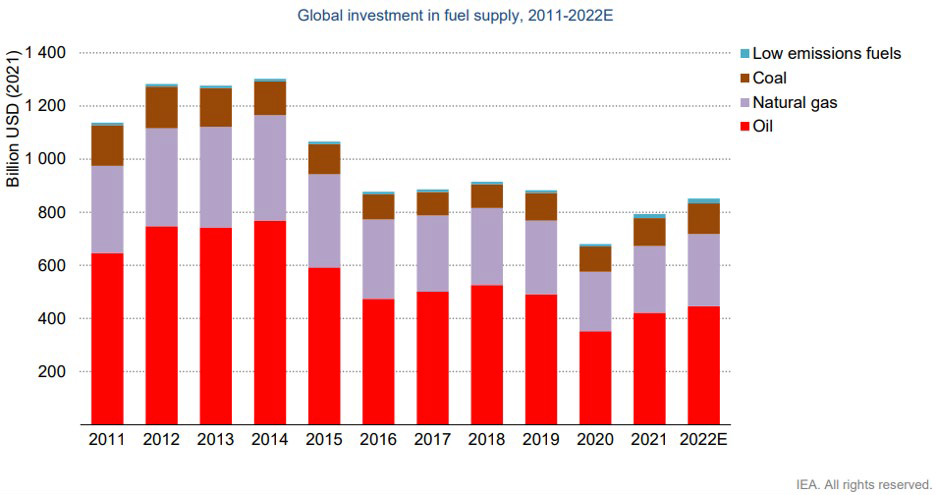 Several factors are contributing to the inadequate levels of investment in oil and gas. These factors include elevated price volatility, uncertainty over long-term demand, government regulations and stringent ESG criteria, inflation, labor shortages, and intense pressure from ESG investors. [7] This has hiked the cost of capital for long-cycle projects and created additional layers of complexity around the investment decision-making process.[7] Management teams today seem to be unwilling to risk their jobs by investing in future supply, which is unsurprising given they only have to look back to 2014 to see what can happen when the market gets flooded with too much supply. Instead, management teams are focusing squarely on free cash flow generation and using that cash to either pay down debt or returning it to shareholders. [8] Oil & gas production is up by just 4.5% in 2022, while cash flows per barrel of production are estimated to end the year 70% higher than in 2021.[8] As a result, the sector will enter 2023 with some of the strongest balance sheets seen in a long time. 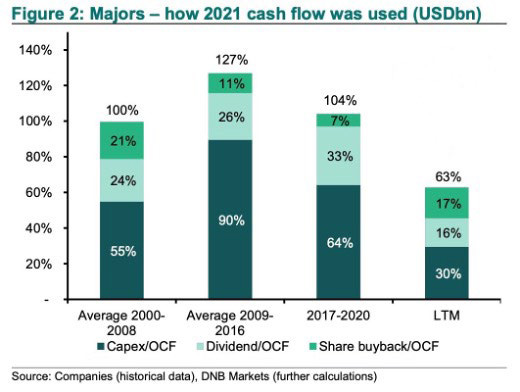 The point on the shift in capital allocation philosophies by major oil and gas companies cannot be overstated. As can be seen in the chart above, the focus on financial discipline and capital return to shareholders is very different than in the past when these companies plowed the majority of their cash flow back into growth, which ended up destroying returns and economic value in the process, in our view. In the book, “Capital Returns: Investing Through the Capital Cycle,” Marathon Asset Management discusses how changes in the amount of capital employed within an industry impact future returns. The following is an excerpt from the book:

“Typically, capital is attracted into high-return businesses and leaves when returns fall below the cost of capital. The inflow of capital leads to new investment, which over time increases capacity in the sector and eventually pushes down returns. Conversely, when returns are low, capital exits and capacity is reduced; over time, then, profitability recovers.” [9]

We feel a similar dynamic is currently playing out in the old energy space, where capital has exited and capacity has been reduced relative to demand, which will allow companies in the space to earn excess profits for a period longer than the market is predicting. Of course, these dynamics could change and will need to be monitored closely.

While we think the medium-term setup for old energy companies is favorable, we don’t think that is at odds with the shift towards renewable energy. In fact, we think the shift towards renewable energy is one of the most powerful long-trends that exists today and wrote a separate whitepaper back in 2021 on the subject, which can be found within the Value Observer section of our website. We believe Anchor is able to balance its ESG mandate by investing in what we believe to be best in class  companies that are focused on climate change and reducing carbon emissions. Once such way has been investing behind companies in the utilities sector that have embraced renewable energy or have a committed plan towards transitioning their portfolios to renewables. In addition to utilities focused on renewables, we have also invested in industrial companies that provide the inputs into electric vehicles, the power grid and solar panels.  These industrial companies benefit from the secular shift to renewables. We have an investment in a company that is building out large hydrogen plants across the globe that will be able to help support the transition. We have also spent time exploring other natural resource and mining companies that make the inputs into electric batteries. Finally, we would also note that many oil & gas companies are focused on finding ways to reduce their carbon emissions while also making investments into renewable energy resources.[10] Ultimately, we believe that the shift toward renewables will continue to accelerate, especially as costs decrease, and that the companies we are invested in will all benefit.

Energy is a complex industry, and the discussion above does not begin to scratch the surface of those complexities. Nonetheless, our objective behind this piece was to provide some key insights into how we are thinking about the investment prospects for both new energy companies and old energy companies. At first glance, it may not seem to make sense to be invested in old energy companies that are seen as being on the losing side of the energy transition. However, we believe that investing requires understanding the expectations embedded in a company’s stock price. In the case of old energy companies, we think the market’s expectations for future performance are too low and provide an attractive investment opportunity for value investors like us. In certain cases, we also believe the future earnings power of companies involved in the renewable space are underestimated. As such, we own both sets of companies within our portfolios.

The views expressed are those of Anchor Capital Advisors, LLC (”Anchor”) as of the date written and are subject to change at any time. Anchor does not undertake any obligation to update the information contained herein as of any future date, nor does it have liability for decisions based on this information. Certain information (including any forward-looking statements and economic and market information) has been obtained from sources we deem reliable, but is not guaranteed by Anchor, nor is it a complete summary of available data. This publication has been prepared by Anchor Capital Advisors, LLC (Anchor). The information is for educational purposes only and should not be considered investment advice or a recommendation of any particular strategy or investment product. These opinions are not intended to be a forecast of future events or a guarantee of future results. No part of this document may be reproduced in any form, or referred to in any other publication, without express written permission of Anchor. Past performance is not guarantee of future results. Inherent in any investment is the possibility of loss. The benchmark returns include in reinvestment of income. Time-weighted portfolio returns are calculated for each monthly period in the prior quarter. Quarterly results are linked to determine annual returns. Individual client portfolio results may vary from the results presented for the model because of different investment objectives, tax status and other considerations. Returns of individual client accounts will be reduced by advisor fees and other expenses which might be incurred to provide investment management, custody, administrative, actuarial, accounting or other services to the client. A complete list of each security that contributed to performance is available upon request.